Something I should really post about was the mini vacation we just went on. 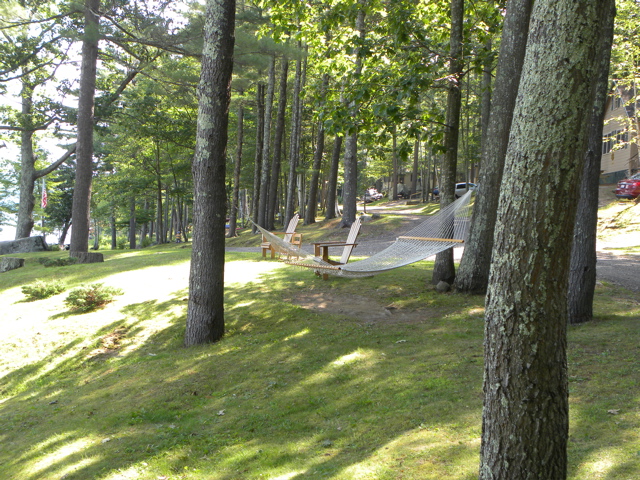 We went to Angell Cove Cottages in Leeds, ME.  Our friends recommended it and after looking at their pictures and the website, we decided it would be the perfect place for a small vacation. 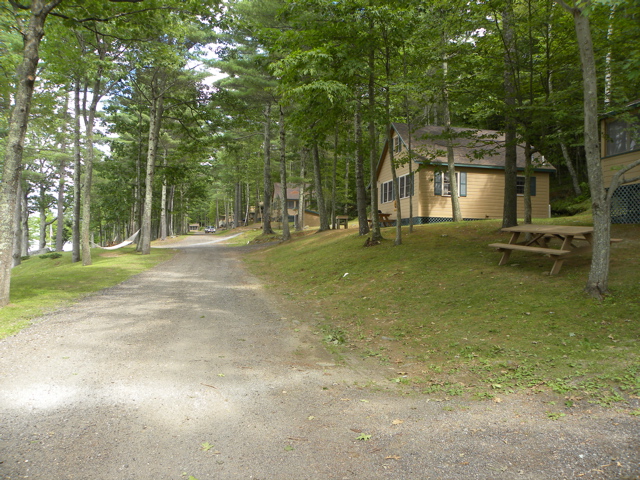 And it was. Each cottage has a bird theme. We stayed in the Mallard Duck cottage. 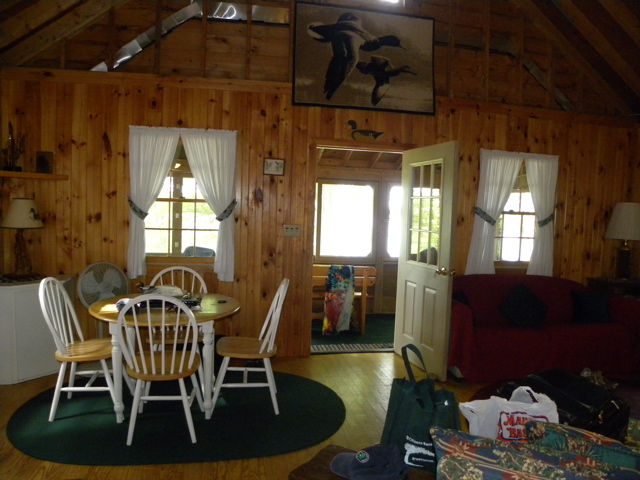 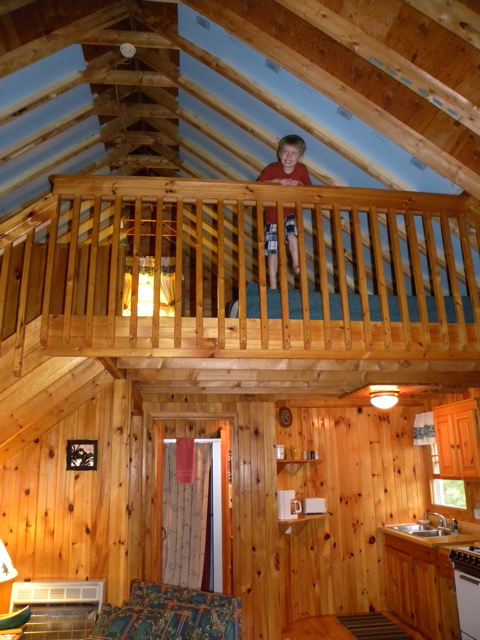 Although it had a bedroom with a big bed on the 1st floor, we all chose to sleep up in the loft together in the 3 small beds. Part of it was because we didn’t want Emmet to be all by himself up there, and part of it was because it was a loft! I’ve never slept in a loft before and I always thought they were so cool.  And it was! And so cozy.

And there were hammocks! A few of them were spread across the camp. 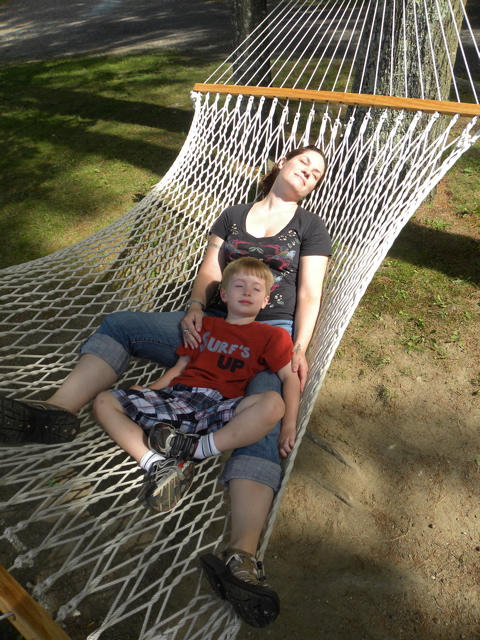 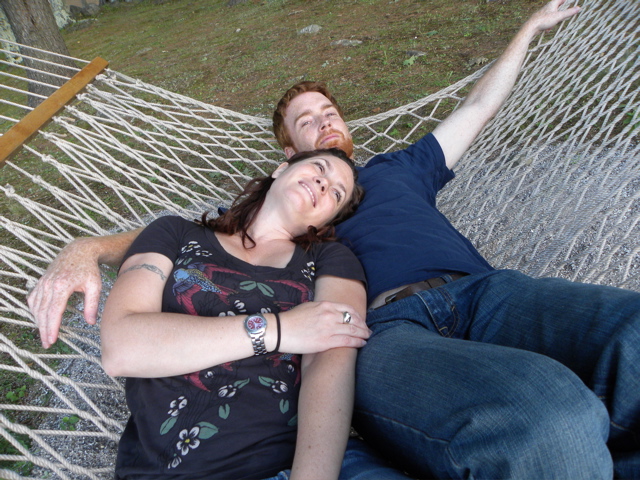 There was a small swingset. 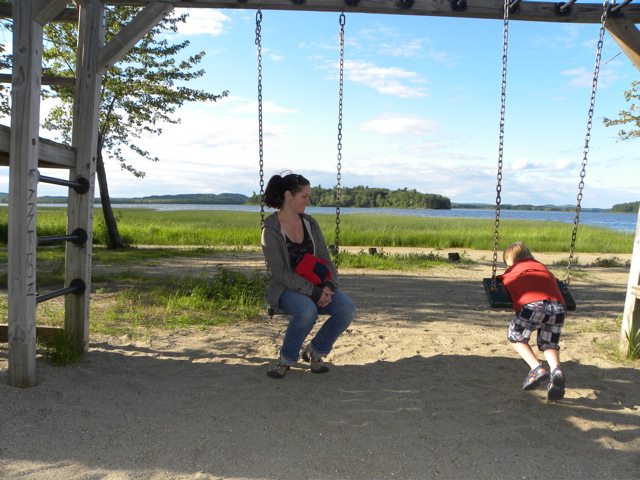 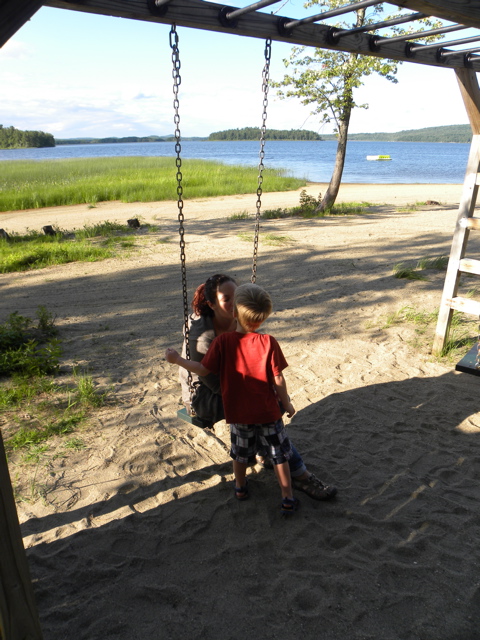 And a beach. Mike bought 2 fishing poles on our way there, one for him and one for Emmet. Emmet liked fishing, but quickly lost interest if he didn’t catch a fish within 20 seconds. He would tell you he caught lots of fish though, because when Mike would hook one, he’d call Emmet over to reel them in. Emmet thinks he’s quite the fisherman. 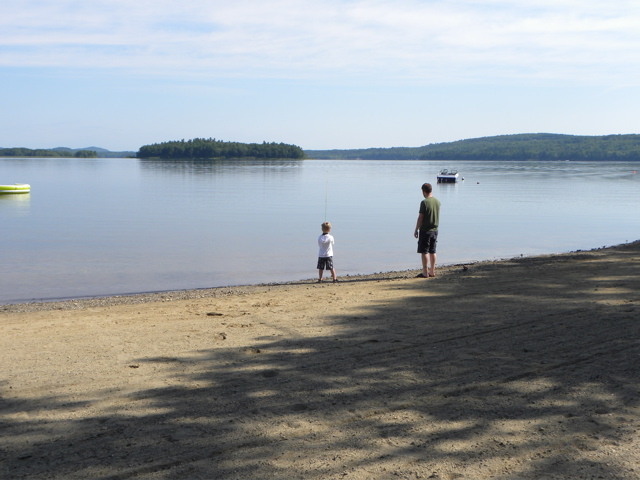 The lake there is very shallow, and you can walk almost halfway out to the island you see. There was a raft WAY out in the water, but you could walk to that too! 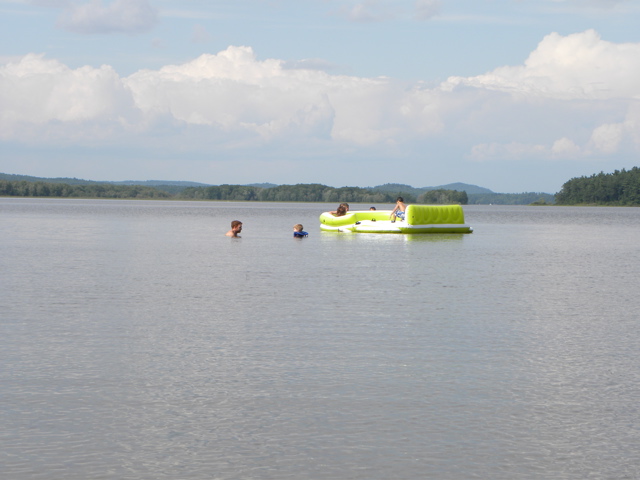 Emmet loves the water and we had to practically drag him out of the lake anytime we wanted to do something else. 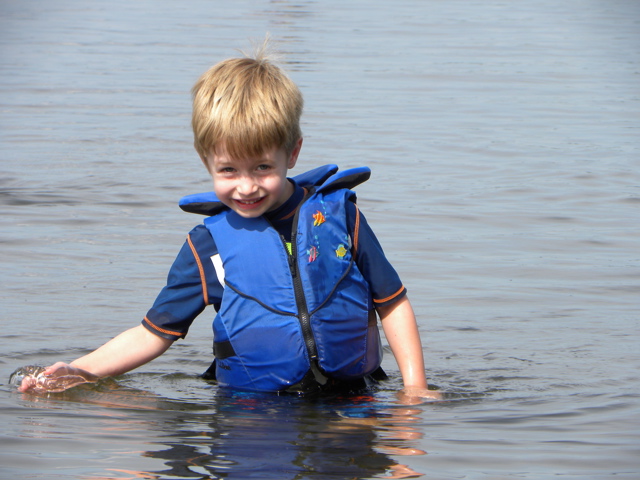 We had a fire every night on the beach. And we would roast marshmallows, but Emmet preferred his not cooked….or just a LITTLE warm. We told him he was taking all the fun out roasting marshmallows. 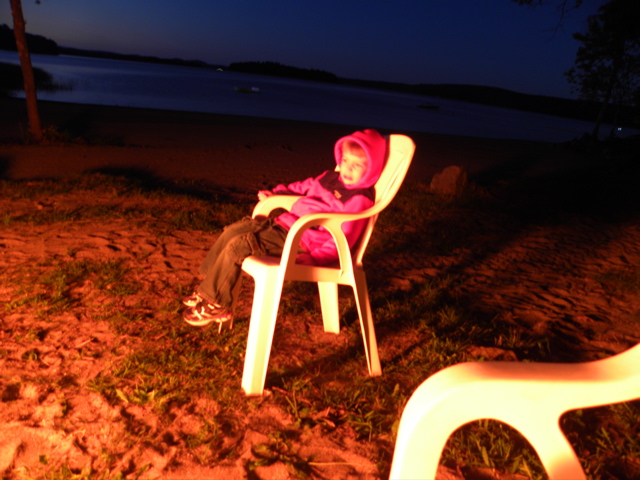 Who doesn’t love a hot dog in your underwear? AND a new movie that your mom bought for you special for your vacation! 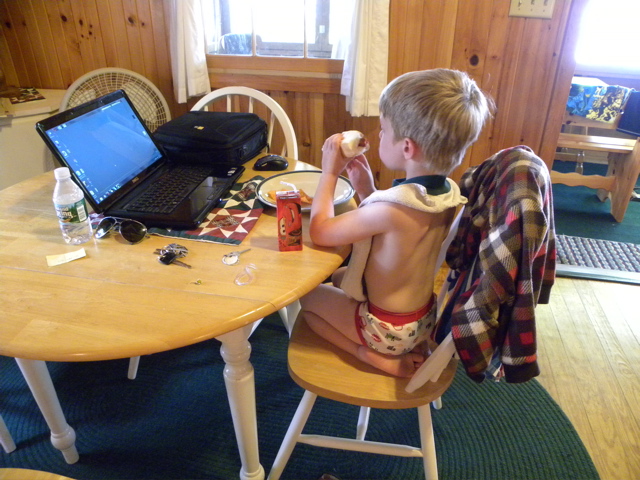 I  did as much knitting on the super secret project as I could. No one ever takes pictures of me knitting…I guess my family doesn’t find it to be as exciting as I do. But somehow I did end up with this picture of me knitting at our picnic table. It could have been from Emmet playing with the camera. I’m marking a finished row on the pattern. 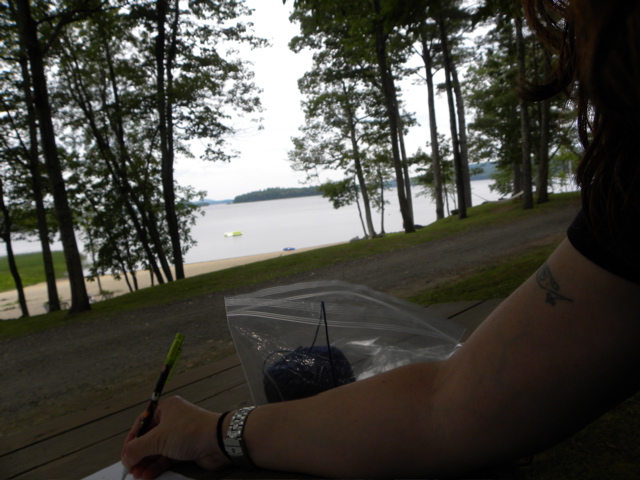 We ate one night at a place called Fast Eddie’s. It was like a restaurant from the 50’s, and you could eat inside or outside or even have them serve you in your car. They had old fashioned cars everywhere and this made Emmet’s night. 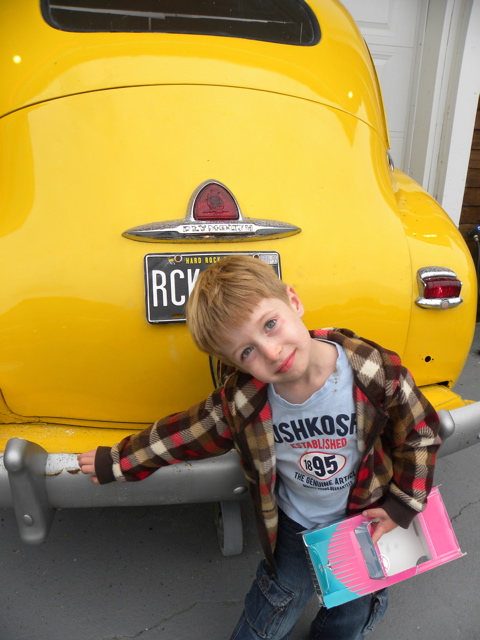 And on the outside there was a mural that had Emmet fascinated….well…at least the girl had him fascinated…. 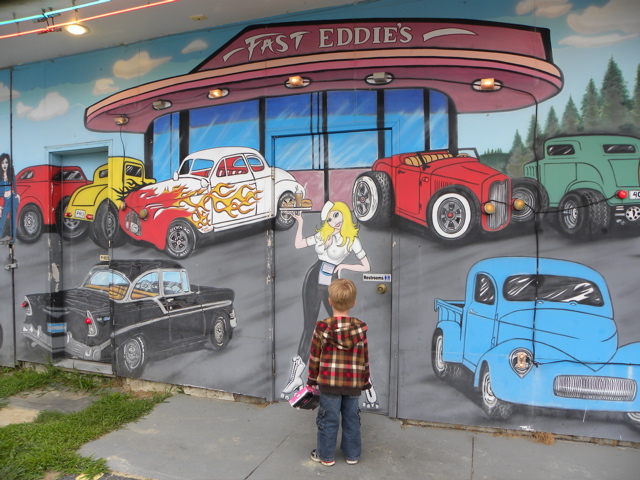 And Mike liked her too. 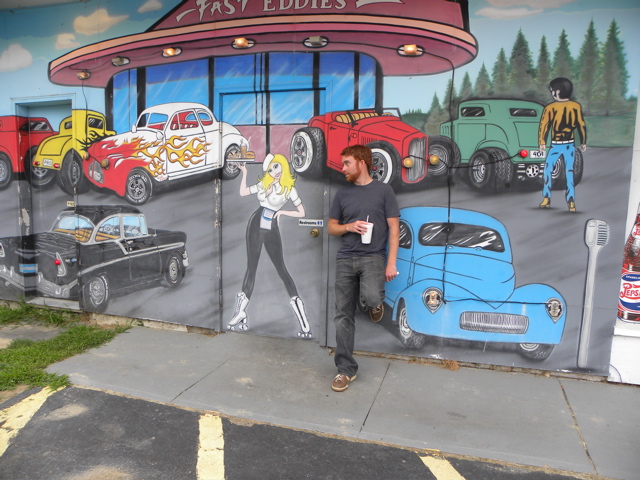 They also had a playground out back filled with things they just don’t have in playgrounds these days. 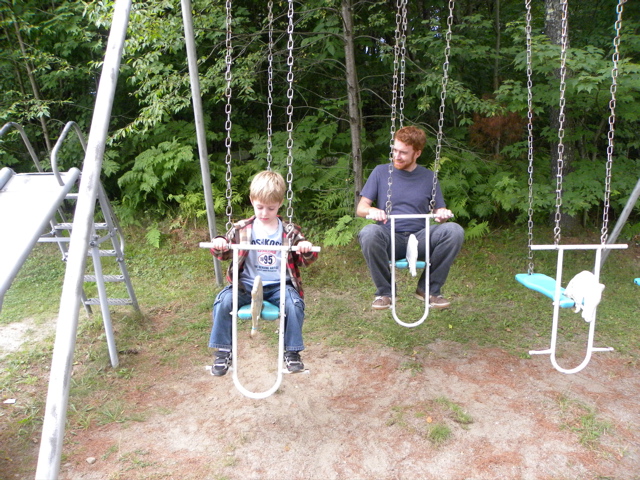 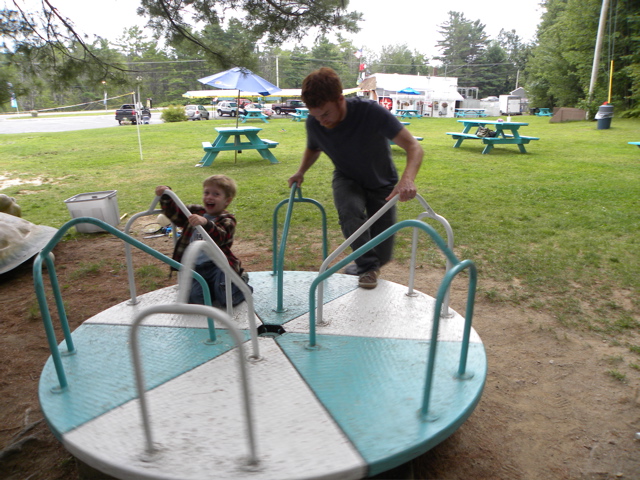 And alas, this post is getting waaay too long, I know. But I still have some nice pictures left to show, so I’ll just lump them all together here, at the end. 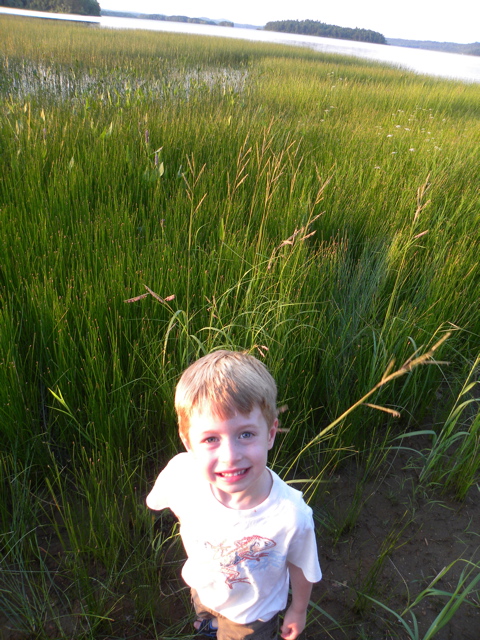 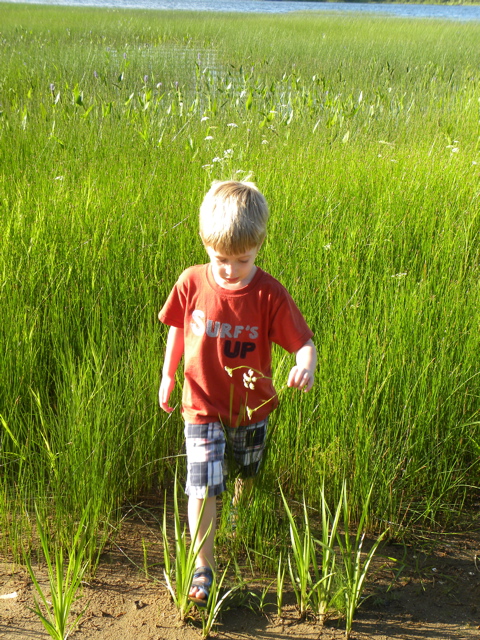 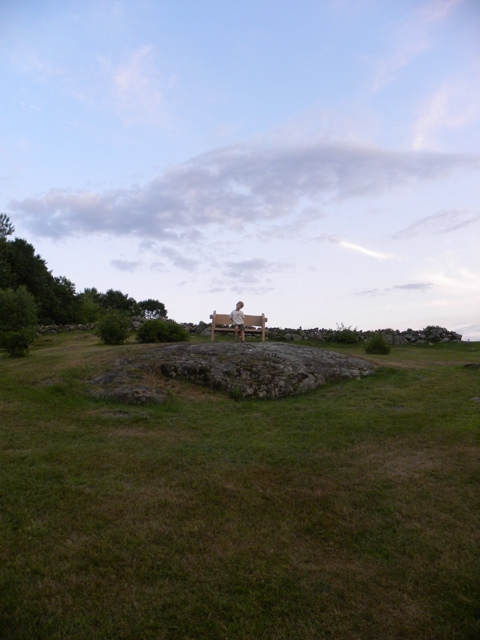 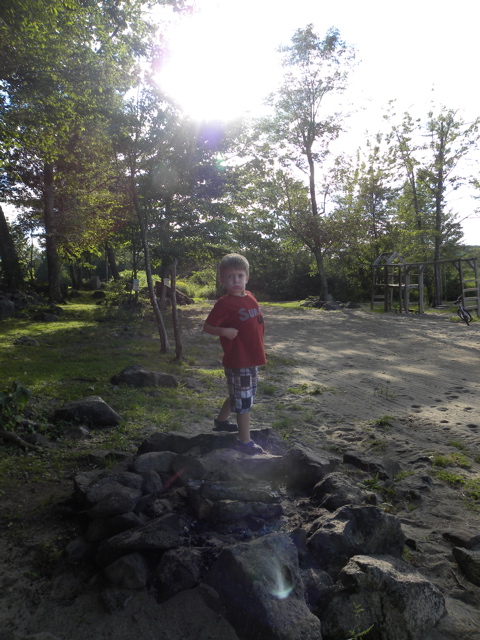 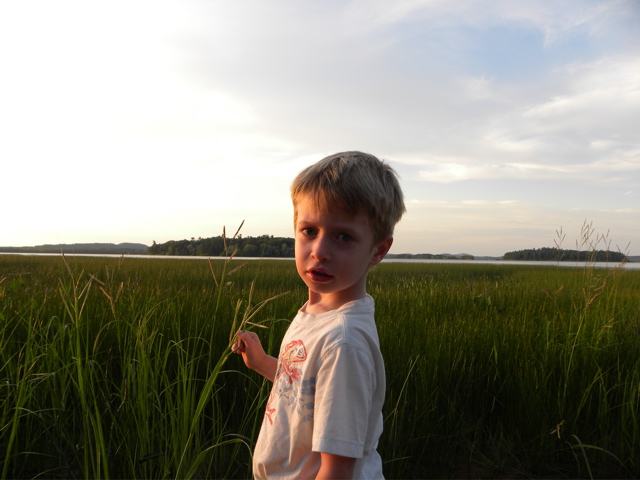 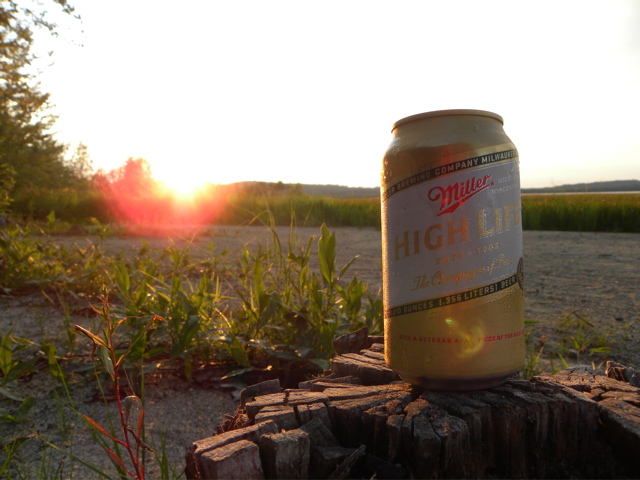 Super Secret project might make my hands fall off.